English Translation (edited)
It has been 25 years since the launch of Monkey Island 2: LeChuck’s Revenge, the acclaimed sequel of The Secret of Monkey Island, launched in October 1990. At the time, simultaneous worldwide releases were inconceivable: the game started to arrive in U.S. stores during that month. A year later, it arrived in Spain… and it was a huge success (although I have been told by Erbe’s old Management team that it sold less than we would expect such an awesome game to have sold nowadays). To be fair, part of the success of Guybrush Threpwood’s adventures in Spain is thanks to its fabulous translation. Schaffer, Gilbert and Grossman’s script, is full of jokes and wordplay – you’d have to be fluent in English to be able to play the original version. The Spanish translation of Monkey Island not only perfectly reflects the tone of the original text: it is also an immersive creative exercise where many jokes are masterfully re-written and adapted to the Spanish culture. Hence, many of the iconic phrases Spanish players remember are not actually in the original English text – they are the extraordinary work of the translator. Randall Mage, born in Long Island (NY) and raised in Madrid (Spain), is the skilled translator of The Secret of Monkey Island. When he was just 5 years old, his parents brought him along on a two-week vacation to Madrid. They fell in love with the city and canceled their return flight. Mage started as a freelance video game translator with the Spanish video game distributor Erbe, but when they shut down, he set up his own translation company, Localsoft, S.L., which has been in business for more than 25 years and re-located from Madrid to the beautiful city of Marbella in 2005. We spoke with Randall Mage not only to carry out a small homage of Monkey Island, but in recognition of the excellent work, many times anonymous and unrecognized, of all those professional translators that allow us to enjoy video games in our native language. Happy 25th Anniversary Monkey Island!

You started working as a translator in 1988 and quickly specialized in video games. You started working with Erbe which at the time was the most important video game distributor in our country. How do you remember your time at Erbe?
Erbe treated me very well. Their staff were passionate videogamers. They were highly professional and friendly people – and made you feel at home. I have very fond memories of Erbe and the people who worked there.

The video games industry has changed a lot and not just because of the internet. Industry growth has brought along draconian contracts, huge teams, quality assurance and testing… ¿How did it work back then?
As a translator, you purchased a dozen or so dictionaries and you’d go totally nuts searching for words only to find out that many English words were not included back then in Spanish dictionaries. There was no internet at the time and we didn’t have translation memory tools. We worked with floppy discs, 12” monitors and if you were a techno-geek, you’d be fortunate enough to have a 40Gb hard drive. If the developer sent you a text editor to use for your translation, it didn’t accept all of the Spanish accents or special characters (that’s right, no “ñ”, so instead of writing “año” (year) you were sometimes forced to write “ano” which is literally an ass hole in English… so the year 1795 would read something like: in the year of the asshole 1795! or 1795 asshole!). These text editors did not include spell checks or grammar checks. Regarding dubbing, we didn’t dub simply because the audio files would not fit on a diskette! LucasArts for example would send me builds via an international courier. The builds included my Spanish translations completed at the time of the build, so I could play sections of the game in Spanish and correct errors. It was basic testing but sufficient for that period in time. Strict confidentiality agreements have always existed in this industry and we abide by them.

How did the Spanish video game crisis of the ’90s affect you?
The closure of Erbe affected me because they were my main client and gave me large volumes of work – I remember I would sometimes have 10 boxes of games piling up on my desk and they all needed to be translated ASAP. After Erbe, I worked with other Spanish video game distributors, but it wasn’t the same. They paid unfair prices and didn’t appreciate my work, so in 1996 I decided to work directly with U.S. and U.K. publishers and set up my localization company Localsoft, S.L. Nowadays Localsoft, S.L. is one of the leading localization companies in the world and the localization Company that has been localizing video games for the longest time. 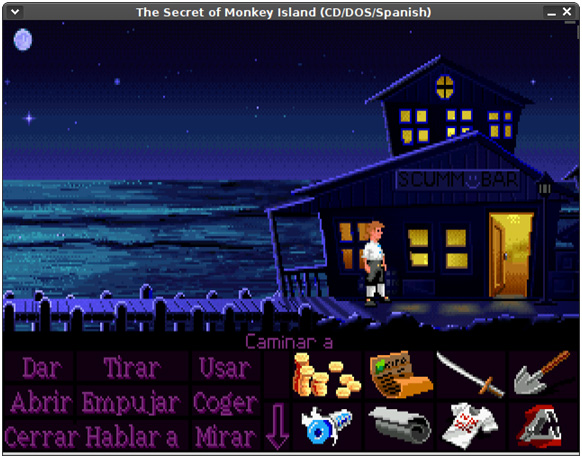 The Secret of Monkey Island was your baptism of fire: I cannot think of any other title of that period in time that is harder to translate… Do you remember what you thought when you started to see those texts?
I took it as a challenge. I am fully bilingual, so the text didn’t worry me in the least, but I do remember being worried about the deadline. It was a relatively large project at the time. If I remember correctly, there were approximately 50.000 words of in-game text plus the Hint Book, which was another 15.000 words. The deadline was short, around 22 days because I spent a couple of weeks buying and configuring a new custom-built PC for this title. I worked all night until dawn because I was able to concentrate better at night and a joke could take me from a few seconds to several hours to translate since I had to invent some of the jokes so that they would be fit for the Spanish culture and language. I also remember thinking about my translations over and over again so that they would be very funny in Spanish.

There are many jokes in Monkey Island that simply cannot be translated to Spanish, so you had to author as well. Did you have total freedom to adapt the jokes? Did you know from the start that you would have to be creative or did you decide along the way?
I had total freedom to adapt the jokes and full access to Angel Andrés and Ernesto Fernández-Maquieira at Erbe. We had a meeting and decided that it was a very special title and my translation needed to be very creative. I remember Angel would get upset and tell me that I translate the wrong way around until one day he said: “I finally understand why you translate the way you do!”. As an editor, it was more difficult for him to proof my localized texts than literal (word by word) translations, which was what he was used to editing at the time. 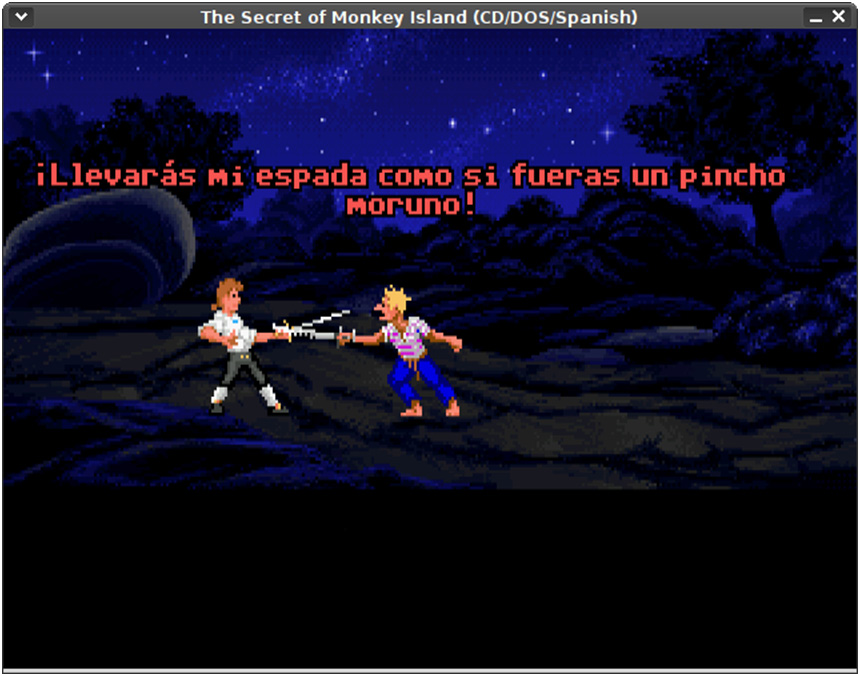 Many of your phrases have become common jargon for Spanish gamers: “yo soy cola, tú pegamento…” “Llevarás mi espada como si fueras un pincho moruno…” “Porfaplis recubierto de nata…” Which of your creations do you like best?
I truly admire the extraordinary work LucasArts did because the original English version was very funny. My goal was to translate the game as if it had been originally written and published in Spain. We achieved excellent results keeping in mind the restrictions and limitations at the time. I do not prefer any of my creations more than any other. I think it’s the creations as a whole that make this such a special game.

Besides the jokes that did not have a Spanish translation, what do you remember as being the most difficult part of this job?
I played The Secret of Monkey Island a zillion times before it was launched in Spain. That was perhaps the most difficult part of the job: playing, translating, adapting, proofing, testing, playing, translating, adapting, proofing, testing… over and over again. There were times I had to play the same scene 15 times (and spend half an hour just to get to that scene) to fine-tune my translations, only to play the next level and realize that my previous translation was out of context and needed to be changed… this happened throughout the game. It was hard work with sleepless nights, but it was well worth the effort.

Besides Monkey, you also translated the Leisure Suit Larry series. What other games do you have fond memories of and why?
I personally translated more than 350 games between 1989-1997 and together with my company Localsoft, S.L., we have translated more than 3000 game titles. I have always liked LucasArts, Microprose, Nintendo, and Sierra games. I enjoyed translating flight simulators such as F-15 Strike Eagle, TFX, and EF3000 because they were technical translations and I used to fly missions in-between translations. I also liked to play Duke Nukem, Wolfenstein, and Doom over the LAN line for an extra perk during coffee breaks.

What is your opinion of the Spanish translation industry nowadays?
There are excellent and well-trained translators in Spain. Translation prices are affordable and the quality-price ratio is very good. It is the perfect time to invest in translations and I recommend it to any company that wants to grow its international business and revenue.

Some other memorable titles translated by Randall Mage:

Sorry, the comment form is closed at this time.